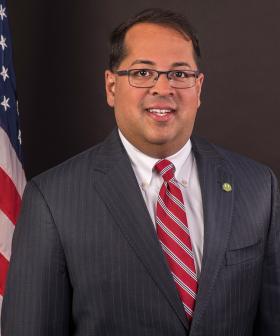 Commissioner Neil Chatterjee was nominated to the Federal Energy Regulatory Commission by President Donald J. Trump in May 2017 and confirmed by the U.S. Senate in August 2017. He served as Chairman from August 2017 to December 2017 and was again named Chairman on October 24, 2018 to November 5, 2020.

Under Chatterjee’s leadership, the Commission was named the No. 1 Best Place to Work among midsized federal agencies by the Partnership for Public Service.

Additionally, Chatterjee has made energy infrastructure a top priority. As Chairman, he led the Commission to reach a critical agreement on a framework to clear the way for the approval of several LNG export facilities, following two years in which there was no Commission action. Building on the Commission’s efforts under the One Federal Decision Memorandum of Understanding signed in 2018 with federal partners, Chatterjee took action to cut through unnecessary red tape, reduce inter-agency friction and increase the number of engineers working on reviews. In July 2019, Chatterjee announced creation of the Division of LNG Facility Review & Inspection, including the establishment of a Houston Regional Office, to accommodate the growing number and complexity of applications to site, build and operate LNG export terminals. Each of these actions has further advanced the Chairman’s priority of expediting and improving LNG export terminal application reviews.

Chatterjee strongly believes that FERC must proactively address shifts in the energy industries it regulates to ensure that emerging technologies play an integral role in wholesale electric markets. First as Commissioner and again as Chairman, he voted to support FERC’s landmark Order No. 841, requiring competitive wholesale market operators to facilitate the participation of energy storage in their markets. Chatterjee views energy storage as a potential game-changer for the nation’s electric system and has advanced reforms to break down market barriers.

Achieving one of his top priorities, Chatterjee also pushed forward a proposed rule to modernize the Commission’s implementation of PURPA, which was enacted by Congress in 1978. The proposed reforms balance today’s tremendous technological advancements in renewables and increased sophistication in competitive markets, with Chatterjee’s objective that FERC continue to meet its statutory obligations.

In 2019, Chatterjee launched the EnVision Forum to bring together thought leaders and new voices in the energy world. This ground-breaking venture started a conversation focused on new lines of communication and collaboration to address issues facing the nation’s changing energy landscape. Chatterjee has been an outspoken voice on the need to secure the nation’s critical energy infrastructure against physical and cyber threats. He’s advocated for leaders to continually evaluate security rules and postures to address shifts in the energy industries so that companies can both harness the benefits of new and emerging technologies and mitigate associated risks.

Prior to his tenure at the Commission, Chatterjee served as an advisor to Senate Majority Leader Mitch McConnell (R-KY), where he played an integral role in the passage of major energy, highway and agriculture legislation. Chatterjee previously worked as a principal in government relations for the National Rural Electric Cooperative Association and as an aide to House Republican Conference Chairwoman Deborah Pryce (R-OH). He began his career in Washington, D.C., as a staff member on the House Committee on Ways and Means.

A native of Lexington, Kentucky, Chatterjee is a graduate of St. Lawrence University and the University of Cincinnati, College of Law. Chatterjee resides with his wife and three children in Virginia.

Tweets by https://twitter.com/FERChatterjee
View All Tweets